Image has my utmost respect right now. For such a huge comic book publisher, they still primarily consist of creator-owned properties. In the current landscape of comics that’s a big deal, especially when so many comic book properties have become fodder for the box office and editorial mandated events happen every few months.

In some ways the comic book beat reminds me of the indie lit scene: not all of the experiments authors endeavor in will be commercial successes, or, in many cases, even enjoyable reads, but that still doesn’t mean that they’re not valuable. I’ve just recently gotten to read Kate Durbin’s E! Entertainment and I have to say it’s a genius text, but it’s not one that I want to go back and read again and again. I can appreciate how Durbin deconstructs how media portrays the interactions between women and the violence between them and her poems set in the Playboy mansion and the underlying sexual violence of an environment like that are stunning, but the reading experience, much like Ody-C and Wild Children, was less than satisfying. The impetus behind these high concept projects are admirable, but I think they’re mired in these colossal ideas and that weight ultimately saps the enjoyment out of them. 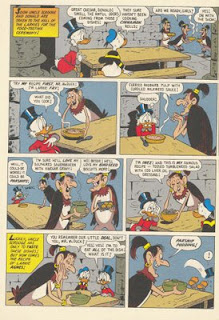 I’ve also been reading more Carl Barks and his Uncle Scrooge comics. The clean line work and the untempered plots of Southwestern gold, and kangaroos, and weird bird women in Walt Disney’s Uncle Scrooge: The Seven Cities of Gold just make me feel good, and, yet, they can be analyzed more deeply, too (like Barks’ mixture of colonialism and moralism and what that possible means, plus this volume has killer back matter and story notes to indulge my super nerdness). Barks is a master at marrying high conceptual shenanigans with the drudgery of everyday life familiar to readers (and yeah, I know they’re ducks. Just go read these comcis and you’ll know what I mean by that).

I want to be transported–transfixed–by my reading, both by my comic books and prose and poetry, and Ody-C, Wild Children, and E! Entertainment didn’t do it for me. Academically and technically speaking, they’re admirable, but I lack that feeling of awe when I read them. I want the child-like wonder back, and, unfortunately, if that means I have to give up on weighty high-concept trappings, then so be it (but I don’t want to give up on them, yet).

Quincy Rhoads lives in Middle Tennessee with his wife and their son. He teaches English composition for Nashville State Community College. His writing has appeared in HTMLGIANT, Rain Taxi, and Indie Cardboard.

From the Grave: “Duck, Duck, Indiscernible” by David James Keaton

Jarod Roseló’s The Well-Dressed Bear Will (Never) Be Found

Entropy is closing at the end of 2021. Read the farewell announcement from our founder here: